A new piece of public art has been installed at the Lynn Museum, and it’s made even more special because of the people who made it: Groups of students working with Raw Art Works in Lynn, which offers free art programming for kids in grades 4 through 12.

The mural, entitled “She is Her(e),” was created by WAMX (Womxn Art Muralists), a paid, young women’s and gender-expansive public arts team for high schoolers within Raw Art Works. The mural depicts a beautiful tree and uses painted wood cutouts and symbolism to explore ideas ranging from bodily autonomy, freedom, belonging, self-expression, and the intersection between community and the self. 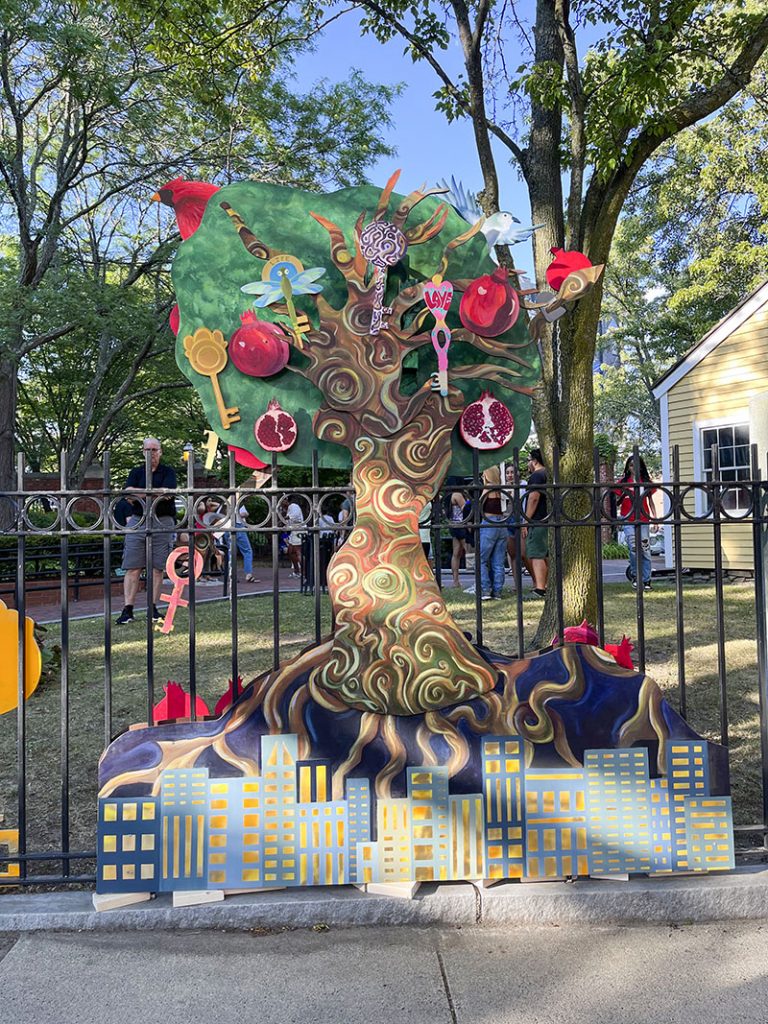 “What’s great is that the product really is fully from the youth itself,” says Alison Miller, senior expressive art therapist for Raw Art Works, WAMX group leader, and herself an alum of Raw Art Works. She said they told the students, “Here’s the space, do what you want.”

The artwork installed on the Washington Street side of the Lynn Museum fence, allowing people to see it as they walk by; it looks like a tree growing up out of the cityscape.

“We’re really excited about that because it’s an open area. It’s very inviting, whether folks are just passing by, or maybe want to spend some time in the courtyards and really contemplate the imagery,” says Doneeca Thurston, executive director of the Lynn Museum/Lynn Arts, who is also a Raw Art Works alumna. 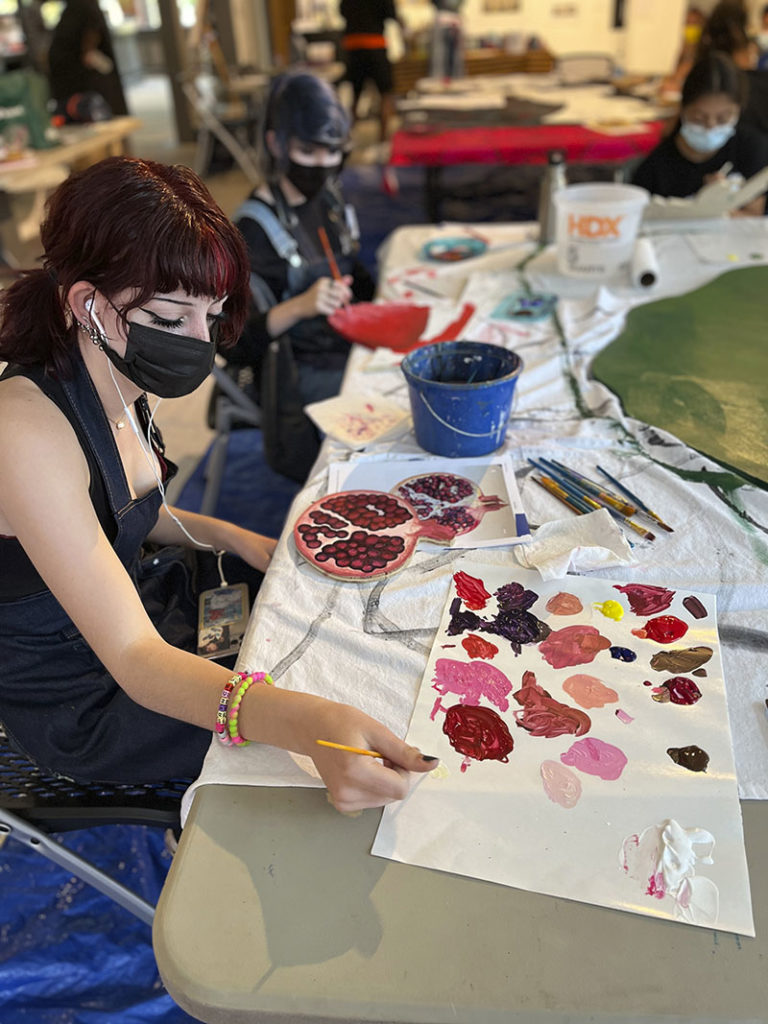 The mural includes imagery like pomegranates to represent ideas like life, bodily autonomy, hope, goodness, and the “seeds of potential,” Miller says.

In addition, each artist has a key with a word on it that represents something that they value, and the keys themselves represent the concept of having access to public space as women and gender-expansive people and feeling safe, as well as having a key to the city and having a say in what happens there.

“I think it’s important for the city to have youth voices be amplified,” Miller says.

The mural is part of a larger project called Lynn Forward/Adelante Lynn that aims to think about how Lynn can move forward as we emerge from the pandemic and in the years to come. 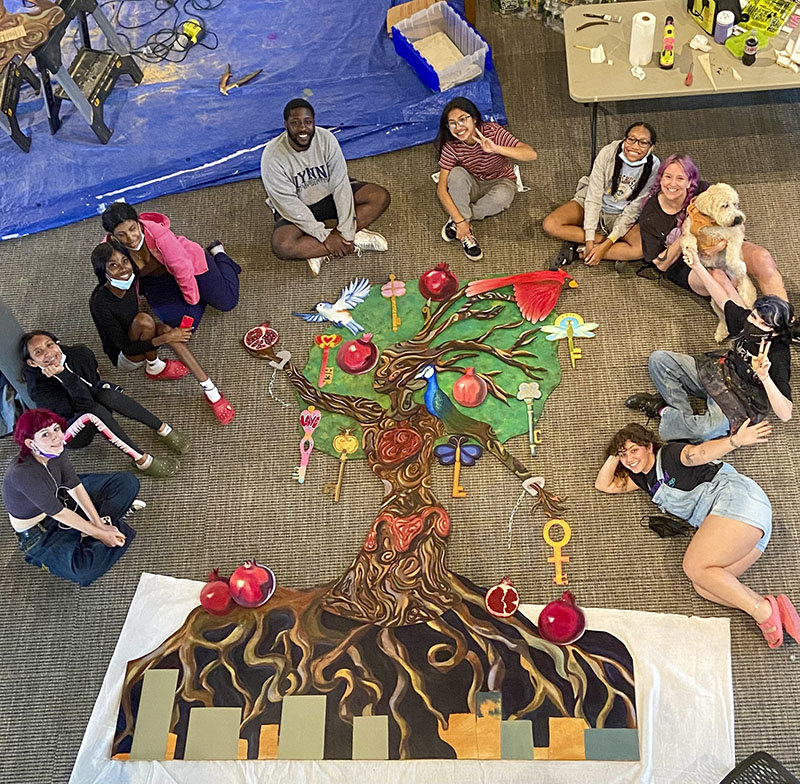 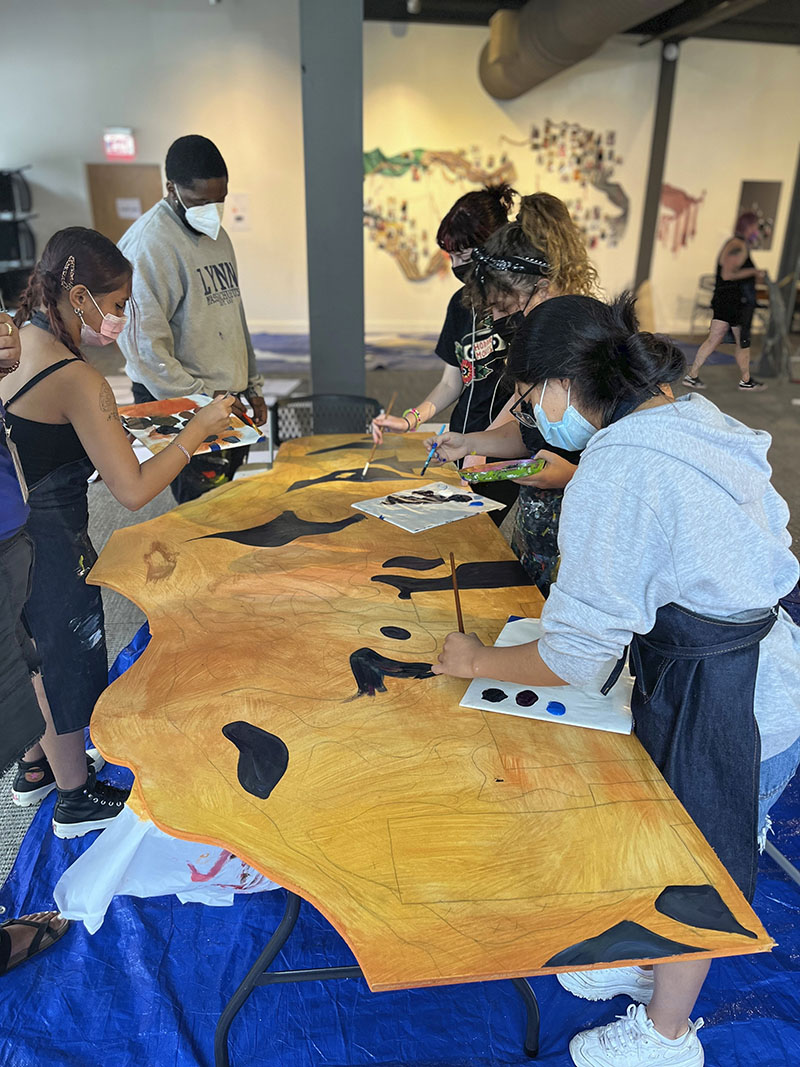 “The mural is one expression of that, involving youth in shaping the future of Lynn,” says Hurteau. “The idea was to leave a lot of room for the youth to kind of create their own ideas and take it in the direction that they want it to take it.”

“One of the goals is to build the arts and culture ecosystem in the downtown Lynn area. So the mural will certainly play a role in that,” Hurteau says. “The concept of the mural is, ‘Let’s work together to bring it forward and to improve our city.’”

With that in mind, the Lynn Museum was a logical place for the mural to live.

“We’re located right in the heart of downtown, and we’re actually celebrating 125 years this year,” Thurston says. “Art is incredibly powerful, and it’s a great way to start community conversation, to uplift and celebrate voices in the community. We really are embracing that sort of community aspect as an institution and making sure that our exhibitions and our programs really speak to who’s here today in Lynn and in greater Lynn.”

Young people are certainly among those who are in Lynn and shaping its future, and in addition to creating the mural itself, some of the teen artists shared their artist statements at the mural’s opening ceremony in July. In that way, the program not only is an artistic one, but also one that helps develop the young artists’ communication and public-speaking skills, allowing them to share their ideas and learn that their voices can and should be heard and valued.

“A big part and a big piece of our work, too, is just building them up to say, ‘What I have to say is important, and I know that there’s a way for me to say it,’” Miller says.